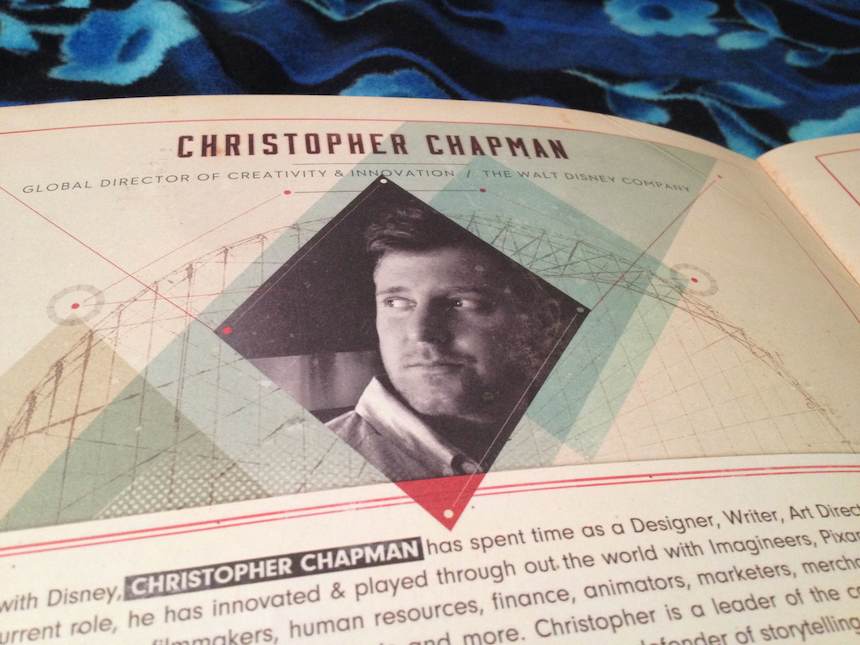 Global Director of Creativity and Innovation for the Walt Disney Company

This was my reaction when Christopher Chapman finished speaking.

He was the first of multiple speakers that I felt were scheduled just for me. He outlined pieces of his childhood that led him to where he is now as the Global Director of Creativity and Innovation for The Walt Disney Company. Hearing him talk about how “story” impacts everything from the production itself, to the marketing to the theme park was helpful. I think I started to think along those lines when I was working for the homeless shelter in Lincoln, Nebraska a few years ago, so it’s awesome to be reminded of the simplest thing of story.

His dad and aunt were in the audience not far from where I was sitting, and every so often they would react to what he was saying. Especially when he mentioned the things like radio theater that his dad introduced him to. I’m assuming they were both reacting out of pride. How could you not be proud of your child at that point? He’s on a stage in front of a 1000 people talking about his work of globally leading one of the most recognized companies in the world and he’s talking about how his dad helped him to get there. How cool is that?

I was able to talk to him after the conference, and I hope to see him at some point while I live in LA.

Here are my shorthand notes from his talk.

Jim Henson’s The Storyteller, Figment (a character), Roald Dahl stories, Choose Your Own Adventure Stories, Jack Benny and old time radio broadcasts, The Shadow, Maltese Falcon, Citizen Kane, his Scottish elementary school teacher telling them stories when it was raining, The Goonies – a sense of adventure, Back to the Future, Indiana Jones, History and the Field Museum. History helps us want to understand where we came from and an understanding of where we’re going. Video games, Walt Disney and the culture he created for his employees, Bob and Richard Sherman developed storytelling through music – take a look at Saving Mr. Banks. 20,000 Leagues Under the Sea and the ride that used to be at Disneyland (now it’s a Finding Nemo Ride), the Peter Pan and Pirates of the Caribbean rides were developed so that you were put in the place of Peter Pan and the pirate. (Peter Pan is still my favorite Disney ride.)

All of these pieces from his life and his interests brought him to where he is now.

Walt Disney acted out the entire story of Snow White before they even made it. Absolutely everything starts with story.

Story: An account or recital of an event being brought to life.

Ask why all the time. What are you doing to bring it to life? Put that in the story.

Put yourself in the main character of the story. Do I want to be a part of that world? Do I connect with that character? Then you can see yourself in that story and then you have something.

Walt created Disneyland and the worlds so that you could become the character and the hero in that story.

Believe in the Willing Suspension of Disbelief – become so much apart of the story that you almost forget where you are. You want the audience to be able to feel the emotion that is trying to be conveyed.

Surprise and Delight. Keep them in the world however much it costs. It has to be real. They’re creating the world of Avatar so that it’s just as mesmerizing at night as it is during the day.

Dig deep into the world. Know the story inside and outside.

There are guidelines for telling stories, but we’re all storytellers. Be authentic. Be genuine. Share your story.