Growing up pretty much all I did was consume stories either written or on TV. I decided I wanted to add English as my second degree because I wanted an excuse to read more in college. My reading consumption has waxed and waned from year to year, but I’m trying to be more intentional starting with documenting what I’m reading.

Below I’ve tried to keep track of the books I’ve read and some of my favorite quotes from the books.

I have watched the Lord of the Rings each December for probably close to 10 years, but I haven’t read the books since junior high. They were a lot easier to understand this time around and packed with so much more than I remember. This may need to become another yearly tradition – I mean Christopher Lee used to read these books once a year.

The Fellowship of the Ring

“Indeed in nothing is the power of the Dark Lord more clearly show than in the estrangement that divides all those who still oppose him.”

I love this. Just because we call them stories or legends, doesn’t mean they weren’t true or based on something innately within us.

Eomer: “‘Halflings! But they are only a little people in old songs and children’s tales out of the North. Do we walk in legends or on the green earth in the daylight?'”

Aragorn: “‘A man may do both,'” said Aragorn. “‘For not we but those who come after will make the legends of our time.'”

For someone who loves story and wants adventure and wants a life that matters, this is one of the greatest quotes to muse over in the entire series.

Sam: “‘Yes, that’s so,'” said Sam. “‘And we shouldn’t be here at all, if we’d known more about it before we started. But I suppose it’s often that way. The brave things in the old tales and songs, Mr. Frodo: adventures, as I used to call them. I used to think that they were things the wonderful folk of the stories went out and looked for, because they wanted them, because they were exciting and life was a bit dull, a kind of a sport, as you might say. But that’s not the way of it with the tales that really mattered, or the ones that stay in the mind. Folk seem to have been just landed in them, usually – their paths were laid that way, as you put it. But I expect they had lots of chances, like us, of turning back, only they didn’t. And if they had, we shouldn’t known, because they’d have been forgotten. We hear about hose as just went on – and not all to a good end, mind you; at least not to what folk inside a story and not outside it call a good end. You know, coming home, and finding things all right, though not quite the same – like old Mr. Bilbo. But those aren’t always the best tales to hear, though they may be the best tales to get landed in! I wonder what sort of tale we’ve fallen into?'”

Frodo: “‘I wonder,’ said Frodo. ‘But I don’t know. And that’s the way of  a real tale. Take any one that you’re fond of. You may know, or guess, what kind of tale it is, happy-ending or sad-ending, but the people in it don’t know. And you don’t want them to.'”

The Return of the King

There are 3 main female characters in the Lord of the Rings. Each very unique that make large contributions to the chess board of the story even if they may not have had much “screen” time. I can relate to Eowyn.

Eowyn: “‘A cage,’ she said. ‘To stay behind bars, until use and old age accept then, and all chance of doing great deeds is gone beyond recall or desire.'”

The paths of the dead scene in the movie is one of my favorites. It has a lot to do this quote and the character of Aragorn that Tolkien created.

Legolas: “‘Even the shades of Men are obedient to his will…'”

You know those nuisances we have in our lives? I have to believe they’re playing a bigger part in the story that we can’t see when we’re in the middle of it. Grace and compassion go a long way.

Frodo: “‘…do you remember Gandalf’s words: Even Gollum may have something yet to do? But for him, Sam, I could not have destroyed the Ring. The Quest would have been in vain, even at the bitter end. So let us forgive him!'”

Faramir: “‘Behold! one has come to claim the kingship again at last. Here is Aragorn son of Arathorn, chieftain of Dundeain of Arno, Captain of the Hose of the West, bearer of the Star of the North, wielder of the Sword Reforged, victorious in battle, whose hands bring healing, the Elfstone, Elessar of the line of Valandil, Isildur’s son, Elendil’s son of Numenor.'”

We may not be able to see what’s happening in the middle while we’re waiting, but the end is all the more worth it.

Gandalf: “Many folk like to know beforehand what is to be set on the table; but those who have laboured to prepare the feast like to keep their secret; for wonder makes the words of praise louder.” 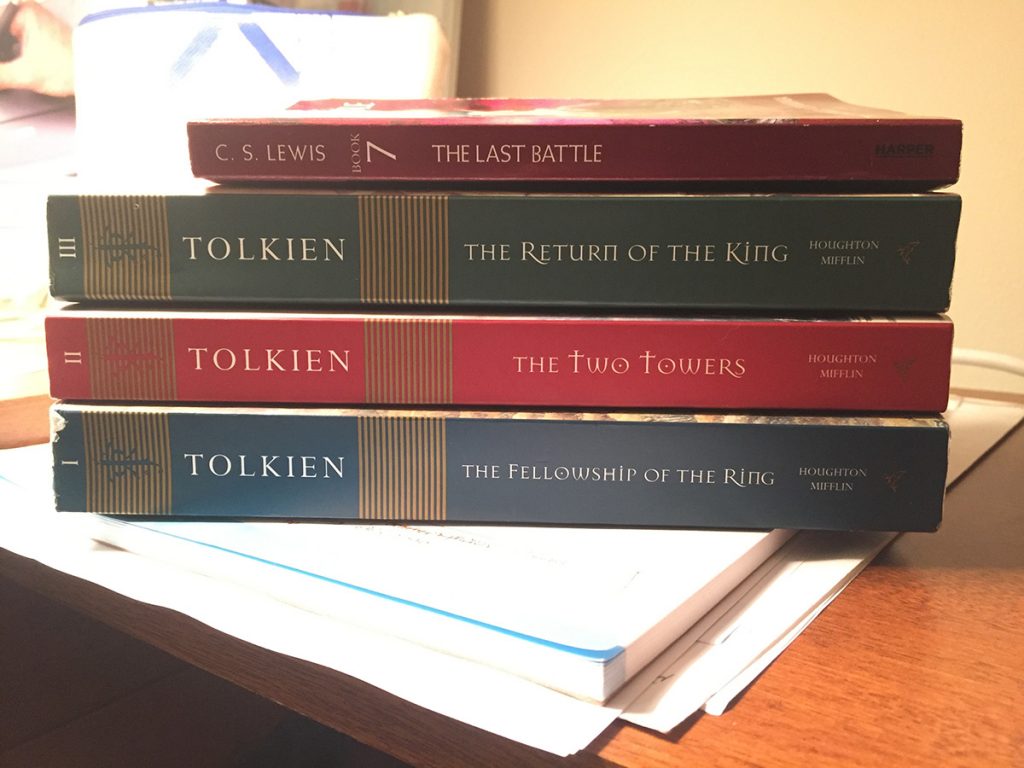 I went through some of my favorite fantasy series last year, but didn’t finish the last book of the Chronicles of Narnia. I actually avoided it, because of the deep impression it made on me growing up. I was afraid it wouldn’t hold up. I had no reason to fear. Reading it as a 30 year old, I’ve realized how much it has shaped my worldview. C.S. Lewis packed a ton of wisdom into a 200 page book. He’s not presenting it as gospel fact (thus the fantasy aspect), but he does present it to you and encourages you to wrestle with it – if you’re willing to see it.

This will mess with people’s theology, but I love it.

“Then by reasons of my great desire for wisdom and understanding, I overcame my fear and questioned the Glorious One and said, Lord, is it then true, as the Ape said, that thou and Tash are one? The Lion growled so that the earth show (but his wrath was not against me) and said, It is false. Not because he and I are one, but because we are opposites, I take to me the services which thou has done to him. For I and he are of such different kinds that no service which is vile can be done to me, and none which is not vile can be done to him. Therefore if any man swear by Tash and keep his oath for the oath’s sake, it is by me that he has truly sworn, though he know it not, and it is I who reward him. And if any man do cruelty in my name, then, though he says the name Aslan, it is Tash whom he serves and by Tash his deed is accepted. Dost thou understand, Child? I said, Lord, thou, knowest how much I understand. But I said also (for the truth constrained me), Yet I have been seeking Tash all my days. Beloved, said the Glorious One, unless thy desire had been for me thou wouldst not have sought so long and so truly. For all find what they truly seek.

The old kings and queens of Narnia are in the new world trying to understand where they’re at and the professor [or Lewis in the voice of the professor] is reminding them of their Plato.

“‘Listen, Peter. When Aslan said you could never go back to Narnia, he meant the Narnia you were thinking of. But that was not the real Narnia. That had a beginning and an end. It was only a shadow or a copy of the real Narnia which has always been here and always will be here: just as our own world, England and all, is only a shadow or copy of something in Aslan’s real world. You need not mourn over Narnia, Lucy. All of the old Narnia that mattered, all the dear creatures, have been drawn into the real Narnia through the Door. And of course it is different; as different as a real thing is from a shadow or as waking life is from a dream.’ His voice stirred everyone like a trumpet as he spoke these words: but when he added under his breath ‘It’s all in Plato, all in Plato: bless me what do they teach them at these schools!’ the older ones laughed.” [bold added for emphasis]

Books I Want to Read

How to Win Friends and Influence People

The War of Art

The 7 Habits of Highly Effective People